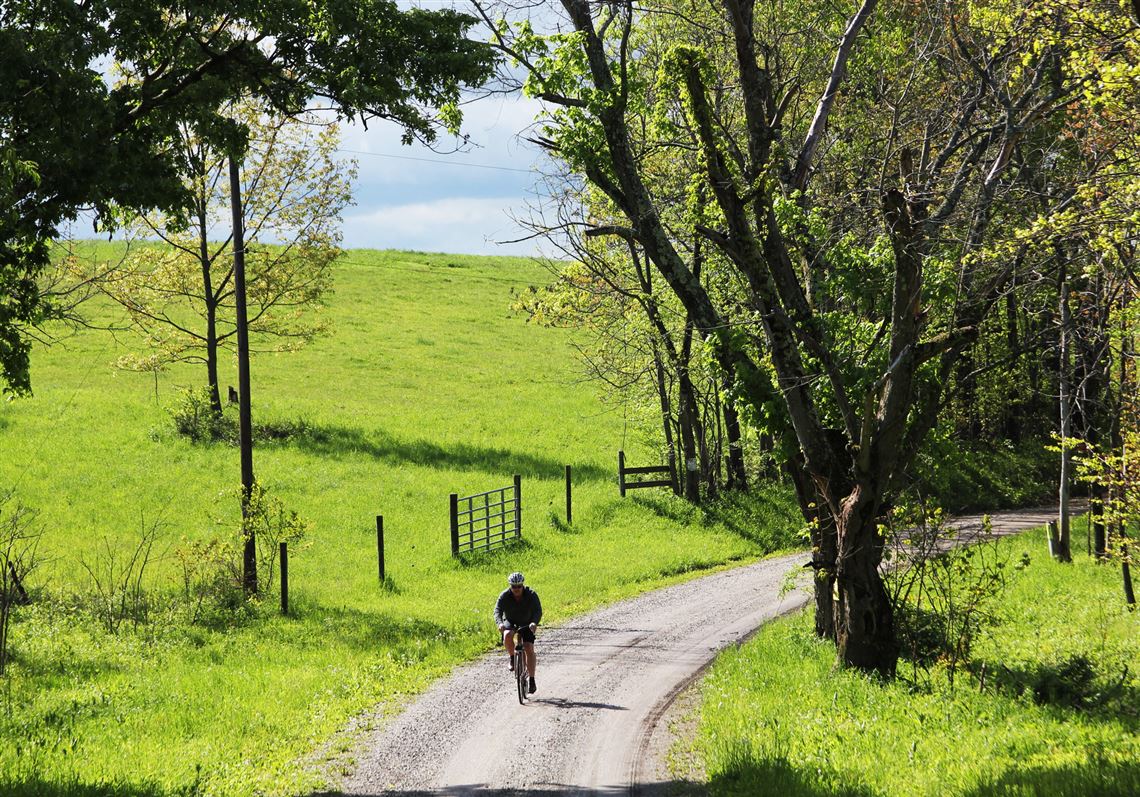 Article written by Bob Batz Jr. Pittsburgh Post-Gazette on May 13, 2017 at 12:00 AM. More and more cyclists enjoy “travel by gravel.” Gravel riding, as it’s called, takes them off the pavement and onto unpaved back roads and other byways.

Gravel riding, as it’s called, takes them off the pavement and onto unpaved back roads and other byways.

You can try it next weekend when SweetWater Bicycles in Ambridge puts on the first Whiskey Rebellion Gravel 50K and 100K rides in Washington County on May 21. The routes cover the literal ground where Colonial farmers grew rye and turned it into whiskey that the federal government taxed, leading to protests and the Whiskey Rebellion in 1791.

“Our ride traverses many of the original roads and three covered bridges that link the farms to the colonies’ spirit markets,” says shop co-owner Don McKee, who wants to make this new ride -— not a race — an annual adventure.

Gravel riding is off-road but “not too far,” he says, challenging but not as technical as some mountain-biking trails and with much less car and truck traffic than riding on smooth paved roads. It’s one of the fastest-growing styles of cycling. You can find organized gravel and other “adventure” rides on websites such as gravelcyclist.com and ridinggravel.com.

There are races and rides in West Virginia, but most “grinder” action is out West. “We wanted to bring it closer to home,” says Laura McKee, who bought the shop with her husband early last year. He chose Washington County for this event after consulting a Pennsylvania State University map of the state’s unpaved roads.

Their shop sells gravel/adventure bikes made by several brands — Jamis, Felt, Salsa, Fuji and Masi — that start at $579. The bikes are built to handle rougher terrain, with wider wheels and tires and wider, more upright handlebars.

“They tend to be very comfortable, sturdy bikes,” says Ms. McKee, who rides a carbon-fiber one that weighs less than 20 pounds. (There’s also an international series of Eroica rides — eroica.cc — that are old-school and encourage riders to grind it out over gravel on vintage steel racing bikes while poking fun at today’s hyper-specialized gear.)

Up to 100 riders can register for the ride -— motto: “Be a rebel, ride gravel.” The deadline is May 17 and the cost is $35, which includes post-ride food and drinks. And yes, there will be whiskey and other spirits from Rebellion-themed Liberty Pole Spirits in Washington, Pa., plus bluegrass music from Washington County’s Jakob’s Ferry Stragglers. (If you don’t want to ride, you can just come to the after-party for $10.) Riders also get a T-shirt and a coupon for $10 off a bike tune-up at SweetWater, which you might need after the ride, if not before.

Mr. McKee describes the course as back country roads with surfaces ranging from relatively fine gravel to large gnarly stuff with a few paved stretches, too. The route is “peppered with old and new farms connected by established and new roads with outstanding views.” It’s up and down and up again, with the 100K (62-mile) ride including 7,000 feet of climbing.

There will be three rest stops on that ride, as riders loop back to the 9 a.m. starting point at Krenzelak Orchards near Prosperity to finish off the first 50K (31 miles) and continue on with the 100K, which will also loop back to finish at the same spot.

“The terrain will be challenging, and we will have a few differently paced groups so that everyone has a ride group,” Mr. McKee says. There will be a “sag wagon” for support and a repair station at the start/finish.

You don’t need a gravel bike, but whatever bike you ride — cyclocross, touring or mountain — you should have at least 32-millimeter-wide tires. And spare inner tubes and patches for flats.